In Every Complaint, There Is the Seed of a Wish 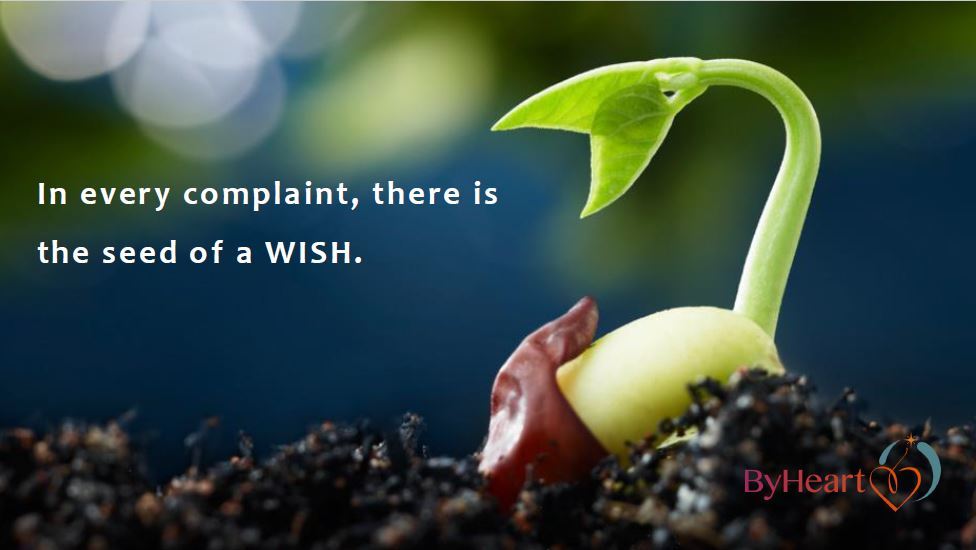 This phrase, which I 'threw together' spontaneously, almost as a joke, has become a refrain in my work: "In every complaint, there is the seed of a wish."

Once you can 'hear' the wish at the heart of your frustration or complaint, you can start to take steps towards fulfilling your wish and making it come true.

To experience for yourself the power of transforming your frustrations into intentions, I invite you to apply what I'm about to say to something that is personally significant to you - otherwise the whole thing may appear academic.

And so - take 5 seconds now to bring to mind the thing that is bugging you the most at the moment.

Re-Framing: Convert a Complaint into a Wish

When I am working with clients on their goals, and they are listing all the reasons why they cannot accomplish the Goal that they long for, they tell me it's because there are Obstacles ahead and Concerns holding them back.

Yet all the while, I am hearing a different story.

At some point, I invite them to consider:

Let me check if I'm hearing you right. If the Obstacles you've named were taken care of, and you could find a way of pursuing your Goal that honoured your Concerns, you'd be good to go?

This shift in perspective is often referred to as re-framing.

What has appeared to you as concerns or misgivings can be seen as pointers, indicators of the shape of the future that would suit you.

At this point in our conversation, people are often looking at me startled, because suddenly I've described a version of their future that actually works for them.

Even though we haven't yet addressed the How, having spent so long feeling that there is no way forward, just the description of a way is often almost shocking to people.

Let me illustrate with an example from my own personal experience.

As I was building up my coaching practice, I realised that a contradiction had been troubling me - and slowing me down.

This realisation came on the back of my giving an interview for an article. I got asked what brought me into coaching. I replied that working in-depth with people was a major attraction for me.

It was the next day that the contradiction that had been bothering me came into focus: I had shifted into coaching to spend more of my working hours with people, and yet so many of the tasks related to building up my coaching practice had me sitting alone with my laptop.

No wonder I was only making slow progress!

The magic of transformation

That was the moment of transformation.

Hearing my own complaint, "I am sitting alone with my computer instead of spending my time with people, which was the whole point!", I knew it could be converted into a wish.

So I made a new wish there and then:


"I wish to accomplish all the tasks related to building up my practice with people."

My wish worked spectacularly well. I started spotting opportunities to incorporate interactions with actual humans at every turn.

Re-writing my website, which I had been dragging my heels away from for weeks, suddenly became an opportunity to create a new page - and then ask someone I knew to look at it with me. This became a great pretext to catch up with people I hadn't seen for a while, so working on the website, rather than being a drag, turned into a source of buzz.

I even invented a new title of Website Reader that I offered to friends and colleagues who were willing to help out.

Discovering and inventing ways to include live time with people into tasks that I had previously found onerous became both a game and a joy.

The website you're reading right now is one result. :)

I have described the steps for putting together the Design Brief that takes care of your misgivings and concerns here: 'How to Develop a Design Brief for Your Life'